7pm - 8pm Red Stripes and above ONLY (Black Belt Class)

The Christmas Party will be held at The Hare Pub from 7:30pm

Tickets are £5 each please see the Tea Club members between 6pm-8pm Monday's and Wednesday's or Ange and Mick (Sir) another time.

There will be a training session on Saturday 6th in Sawbridgeworth from 09:00-10:00. This session is to help those who are grading to go over anything your not sure about.

DO NOT WEAR DOBOK FOR THIS TRAINING SESSION

Good Luck to all.

There will be a special session on Saturday 22nd in Sawbridgeworth from 09:00-10:00. This session is to help those who are grading to go over anything your not sure about.

Good Luck to all.

If you would like to join in and have fun with us in Clacton, the closing date Friday 28th February.

There are not many spaces left so please be quick

You can speak to the admin team during the training sessions.

Please email Sawbrideworth-TKD@virginmedia.com for more information or jst come and see us on Thursday's/Saturday's

Well done to all the 48 who graded

Christmas Party was held at the Hare Pub.

The evening started at 7.00 with awards being presented half an hour later. The results of the grading were then given with 100% pass rate of 48 students including lots of +pass and A grades.

After the announcments and awards the party got into full swing with lots of music, dancing food and drink. A great evening had by all students, young and old. Plans now being considered for future social gatherings.

A really good night for the club.

well done to those who received an award

put into their training, they all deserve a pat on the back.

Well, the grading went well on Saturday 22nd June with 33 students all passing with some great A grades even at black stripe level. Well done to all of our students.

The grading was then followed on Sunday by a lesson giving everyone the good news of the grading results, giving out belts and certificates and then came the fun of the summer BBQ. Lots of food, cooked by Phill and myself accommpanied by some great salads and pasta prepared by some very supportive parents which made it such a great success. Live band playing with lots of dancing, playing football on the field by the younger students, merry time had by all. Well done to all that helped organise it, i am proud to be part of a sucessful team!!! Heres to the next party!

Who would believe that at the end of March we would be travelling to Coventry in the snow! The roads though were ok and we arrived in plenty of time. 39 of us on the coach with 16 students competing to gain some more invaluable experience of the competitive nature of sparring and patterns. Melissa brought home a bronze medal in her tag team sparring with Jag Molines following close behind with his. Parriys Alphous and Danny Moore both waited for what seemed like forever for their bouts to begin. Both competed fantastically well in their first ever competitions as yellow stripes with Danny being beaten by a somewhat heavier yellow belt and Parriys sucessfully bringing home a gold medal after two bouts in the middleweight category. A mention for Mitchell Temple who overcome his nerves and fought, his indomitable spirit shining through and to everyone else, Jacob, Pernall, Danila boys, Owen, Connor Mair, George, Cerys, Nathan and Caprice and of course all their family and friends who came to support them. Well done everybody! Oh yes, and to Victor, our coach driver who reversed the coach so professionally after the sat nav took us down the wrong turning to the Sky Dome Arena. :-)

The grading results, certificates and belts were given out to all those concerned at the Christmas party which took place at The Hare Pub who provided us with some great music, food and drinks. The awards were then given out to the following people:

Student Student of the Year to Jacob Chappell

Student of the Year went to Phill Brown

Young Student of the Year to Melissa Pye

Most Improved Student to Pernall Chappell

The evening was then rounded off with lots of eating, drinking and dancing to Gangnum Style!

A great year for us all.

What a great day. Some of us travelling to Coventry on Saturday afternoon, meeting up and enjoying a nice meal ready for an early start on Sunday morning. After a bit of a queue outside the Skydome Arena in Coventry we met up with the rest of the club who had travelled that morning and settled down ready for the competition to start. Our first medal winner was Becky Howlett who, after a tough final with quite a regular opponent who managed to catch her in the eye, walked away with a Silver medal in the girls blue belt Peewee division. Ryan Brown had a tough fight against a very tough opponent but after getting a bloody nose and having the First Aiders attend to him was advised not to continue the fight much to Ryans huge disappointment. Georgia Thompson, after receiving a hard punch to the nose suceeded in bringing home a silver medal and Ellie Thompson who had moved to the Cadets division brought home the same. Some students joined together to make up teams for the Team Sparring with Melissa Pye bringing home a gold, Phill Brown a bronze, Owen Howe, Mitchell Temple and Pernall Chappell bringing home a silver each, calling themselves the Harlow Stars. Well done all who entered, Bailey and Kalani Bassi, Jacob Chappell, Jason Lockwood, Jag Molines, George Watkinson, Kiera Williams, Caprice Williams and Nathan Williams. Fantastic effort from everybody.

An early start meeting at Passmores at 7.30 with nearly all seats filled on our 53 seater coach to Hemel Hempstead. 26 students entering and what a successful day we all had. Competitors on the day as follows:

What a great day with everyone showing great support for each other. Medal winners were as follows:

A teacher from Passmores Academy kindly gave the club 3 tickets to see a semi-final at the London Olympic Games. Mick Sullivan the 3rd Dan Instructor took Caprice Williams and Jason Lockwood who were lucky enough to be selected to attend with him.﻿ It was a great experience to see Tae Kwon Do at the London Games and seeing the fights that lead to a Gold medal.

Our Summer BBQ was at The Cock Inn Public House on Sunday 24th June. This was an extremely enjoyable day with lots attending the training and then enjoying the sun which decided to shine for us on the day with lots of students enjoying the bouncy castle. 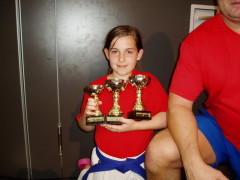 Well done yet again to Becky Howlett who came home from the Midlands Championships with a Gold in the Peewee Division Blue Belt sparring, Gold in the Tag Team sparring and Silver in the Blue Belt patterns. This is a wonderful achievement by a young lady who has no boundaries and who has a great talent for success.

The English Championships on Sunday 18th March 2012 were once more a great success for the club. We had a silver from both Jag and Becky. Jag fought in the final equalising upto the last few seconds with the final point being given to his opponent and Becky who after being injured and receiving attention from the paramedics fought bravely on but was unfortunately pipped at the post. Edriene and Jason Whitbread both fought well to receive a bronze in their divisions making the day at Telford a huge success for us all. Well done!

BRITISH CHAMPIONSHIPS - TELFORD NOV 2011 A great day which started early at 6.00am and a journey to Telford, 11 competitors and a coach full of supporters. Great success with trophies won by Jag Molines coming 2nd in the Peewee Yellow belt division with Jacob Chappell coming a very close third after having to spar against Jag in the semi-finals. Edriene Padua coming 3rd in Lightweight Green belt division and Rebecca Howlett gained a silver medal in the tag team sparring. Well done also to Caprice Williams, Ramon Seow, Jack Rootsey, Jason Lockwood, Jack Jenkins, Max Hegarty and Tymoteusz Bakalarczyk who competed, giving 100% effort, whilst also gaining valuable experience and insight into what happens at the competitions and great preparation for next time! You all did the Club proud!!!

The last training session before Christmas was a great success with everyone training hard before the grading and then enjoying some festive games and prizes.

The grading held at Biggleswade this year was very busy with 26 of our students grading. It was a great success with 14 A grades, 8 plus passes and 4 passes. Well done to everybody!! The end of year party was well attended with all students informed of their success and the issue of new belts together with tropies being presented to:

Student of the Year - Jacob Chappell

Happy Christmas to you all, relax and enjoy and we will see you again in the New Year on Wednesday 4th January.

SOUTH EAST COMPETITION - 2011 A fantastic day at the South East Championships in Crawley. Well done to Becky, Jason, Jag, Edrienne and Caprice for entering and congratulations to all of you obtaining medals and trophies. Thank you to all of you who came to support our competitors and we will look forward to seeing you, and even more at the next competition.